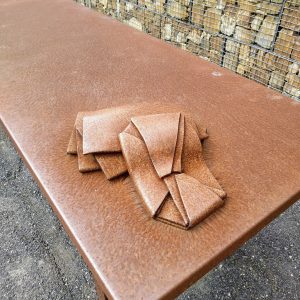 While in Hobart, Tasmania, Australia, recently one of the most moving experiences we experienced was visiting the place where female convicts and their nursing babies were transported to Australia from the British Isles from 1788 to 1853. The story of the Cascades Female Factory has only recently begun to be told.
Above is an image of an artwork in one of the reconstructed yards in the prison… 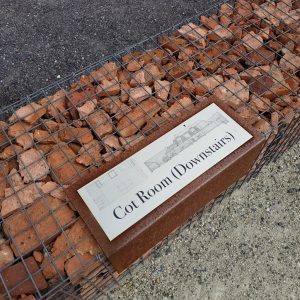 …the place where the babies were kept until they were sent to an orphanage. Many of them died while living in the cold, damp, windy conditions within the eight-foot high walled prison located in the shadow of Mount Wellington. 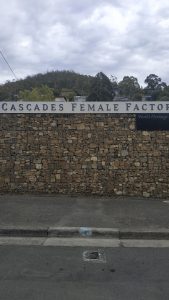 The aim of the prison’s harsh conditions and treatment of the women was to break them down then mold them to be suitable wives to procreate and populate the new colony.
On arrival, their hair was cut off and sold. Throughout their sentence, they were forbidden to speak, they had to share the sleeping hammocks and they worked 12 hour days spinning fiber, weaving cloth, washing and mending laundry and as punishment unwinding strands of worn out, tarred rope for reuse, while in solitary confinement. 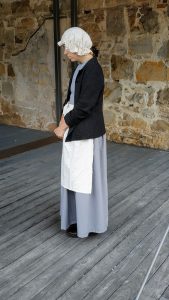 Actors from Live History Hobart, Her Story, “offer an immersive theatrical experience” where small groups follow convict Mary James around the prison as she tells her story – in 1833 she was shipped from Ireland to Australia to serve a 7-year term for stealing a square of cloth. For the participants, it is an emotional roller coaster as Mary tells of her life in the prison. So few have heard her story or the stories of any of the other women. 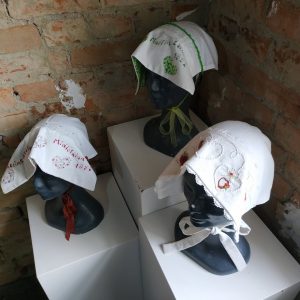 Honourary artist-in-residence, Dr. Christina Henry decided to tell their story to the world by inviting over 25,266 women to each to create a bonnet to pay tribute to these women, each bonnet named for one woman. The project was launched on International Women’s Day on March 8, 2007, in Hobart. 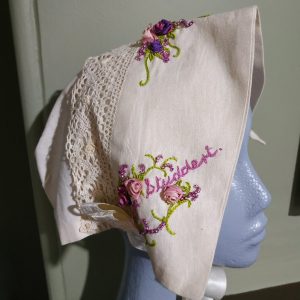 While living in Calgary I can remember the night at the Calgary Guild of Needle and Fibre Arts monthly meeting when we were told about the project and members were offered the chance to pick a name and make a bonnet for her. While a few of the resulting bonnets are on display in the Matron’s House in the restored prison, the project is ongoing as the majority of bonnets travel between Australia, Ireland, and England and continue to tell the women’s stories wherever they are displayed. For more about this project check Christina Henri – Roses from the Heart Facebook page 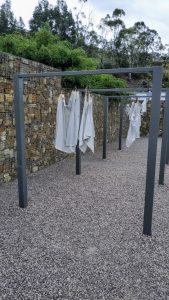 As a tribute to the work the women did, there is an art installation within the prison walls. 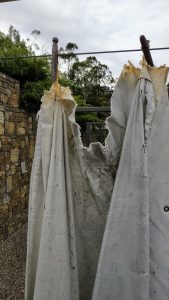 Cotton garments have been hung on a line with metal clothes pegs.

The only reference I could find to this installation is a plaque about convict Mary Kennedy serving 7 years for stealing a gown. Her occupation is listed as a washerwoman. 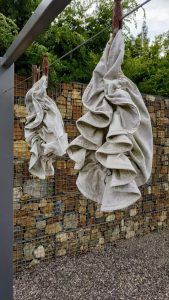 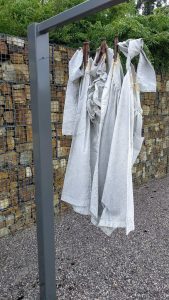 Maybe these garments will hang on the line for 7 years in remembrance of Mary’s time in the prison. 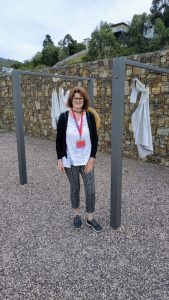 On another level, I was also intrigued by the installation as it is so closely linked to my current body of work in preparation for an exhibition with Laura Feeleus, Laura’s website called ‘The Laundry Room’ where Laura and I are exploring the nature of women’s work.
After several hours exploring this World Heritage Site, we came away emotionally exhausted. We walked back to our rented cottage and rested quietly for the rest of the afternoon, not up to doing any more exploring that day. We were emotionally drained and needed to reflect on what we had experienced and learned.

One thought on “25,266 Female Convicts Transported to Australia”