I have been working on a series for the Articulated Materials: Bridging Waters exhibitions Articulation and Material Girls have organised. Each member of Articulation made and sent one work to the UK where it was exhibited with a body of work produced by a similar group, Material Girls, based around London.
After a successful 3-gallery tour in 2012, the work has been returned to Canada, including one work from each of the Material Girls group. There are 3 galleries in Canada booked to show Articulated Materials: Bridging Waters over 2013 and 2014 (see side bar on the right).
In the meantime, Articulation members are in their studios producing more work to add to their response to the Bay of Fundy to complement Material Girls’ study of the River Thames.

For my first work I researched some of the many rock carvings left by the first inhabitants of the Bay of Fundy coastline. I have continued my research of the Mi’maq material culture. 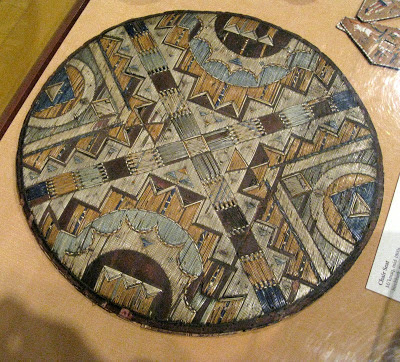 During 2 visits to the Fundy area I found Mi’kmaq artifacts in museums.
A chair seat cover (mid 1800s) made from dyed porcupine quills on a birch bark ground. The technique is often described as a form of weaving but I see it as an embroidery technique because the quills are manipulated the same way as thread. They are twisted, laid down and couched, while the ends pierce the ground. 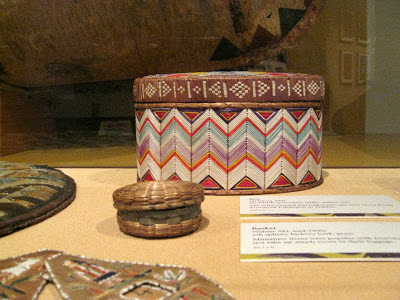 This colourful porcupine embroidered basket is newer as evidenced by the use of aniline dyes to produce brighter colours. It was entered in the 1901 Nova Scotia Provincial Exhibition in Halifax.
The small basket in front would have been produced for the tourist market. It is made from ash splints, hickory bark and grasses by a member of the Waban-Aki group in the mid 1900s. 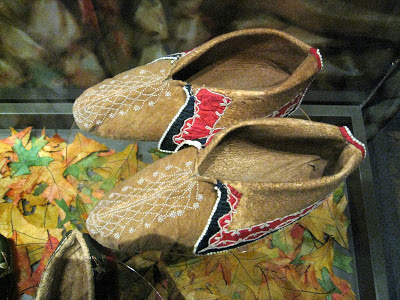 I found Mi’kmaq footwear in the Bata Shoe Museum, Toronto.
The white decoration on the vamp of these moccasins (1830-1840) is beadwork, using the smallest beads on any shoe in the museum’s collection. 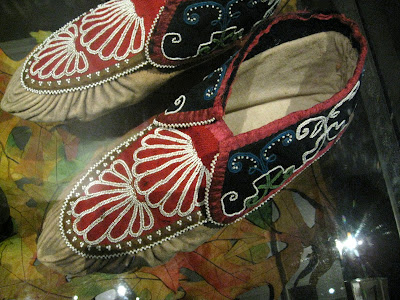 Beading techniques allowed embroiderers to move away from traditional geometric designs. The more organic lines and shapes were appropriated from European embroidery styles at the time. It is an indicator of increasing contact between North American aboriginals and Europeans.
My research continues…