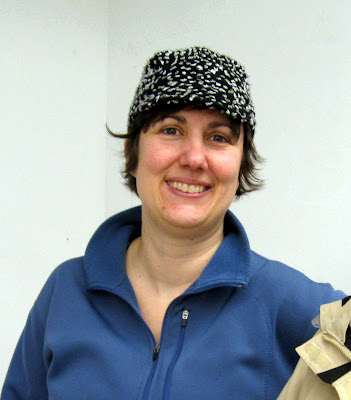 This is Erika Lincoln, an artist who works with electronic media, who was also in-residence for the month. She was part of a large group in a directed residency called Liminal Screen, where each artist worked on their own project but all focused on getting the electronic image off the 2D screen. 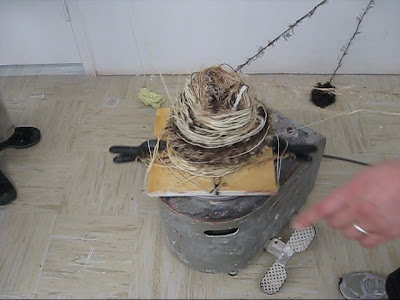 One afternoon, all of the Liminal Screen artists with most of the self-directed artists in residence at the time, opened up their studios. It was a unique opportunity to talk to and see the innovative work of so many artists in one place at one time.
Erika had a number of the parts of her complex installation available for us to see: a number of birds that moved & sang when one went near them, movement also activated a computer program to build a nest on the screen, a nest building machine one could operate (see image above).
Erika is one of those electronic gurus & she helped us out several times over the month when we got stuck, such as the time when we were all set to watch a movie on our studio computer, the popcorn was hot & we couldn’t get the DVD to play. She came to our rescue.
The other special thing about Erika is she is Ingrid Lincoln’s daughter. Neither of them knew they would be in The Banff Centre together, until they were getting ready to go. 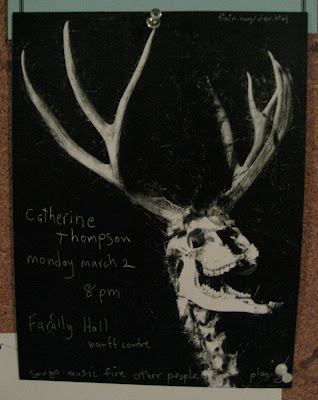 We all went to so many concerts, performances, lectures and exhibitions during our month in Banff. This performance by Catherine Thompson was particularly memorable. She offered us hot Douglas Fir tea as we walked in to a small lounge with a fire in the grate & candles burning on floor-stand candelabras. Catherine sang & recited her own poetry while playing on musical instruments she has made. The evening was a look into her very interesting Skuld project.