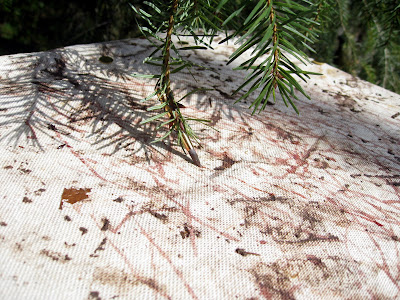 Once I had dried the cloth and sealed it with a workable fixative, I pinned it to a frame and waited for a windy day.

When the wind came I raced outside with a bottle of brown ink and tried dipping Douglas-fir needles then holding up the framed cloth for the inked needles to draw on it.

But I found the needles couldn’t hold enough ink to leave enough of a line on fabric. With previous sampling I had the needles draw on soft paper and it worked very well.

So I rushed inside, hoping the wind was going to hang around, found a small brush and some wire and ran out to the tree again.

I wired the brush tip to the branch, dipped the bristles and held up the framed cloth. 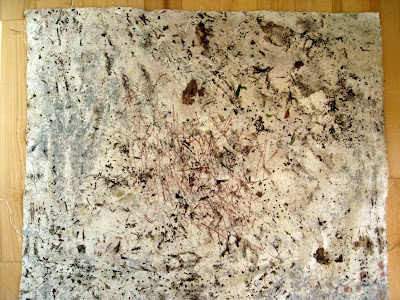 It worked much better with the brush being able to hold more ink.

I think I got so into co-operating with the tree that I overdid the amount of drawing.

But the tree had a lot to say. 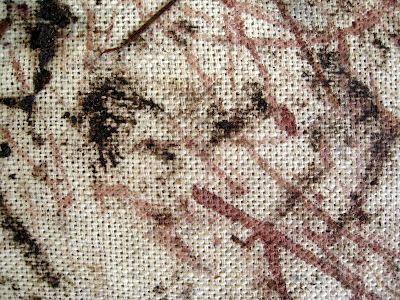 Worm casts had stuck to the cloth even after it was dried.

I didn’t like these lumps of dirt because bits of them kept dropping whenever I handled the cloth.

So I brushed them off. 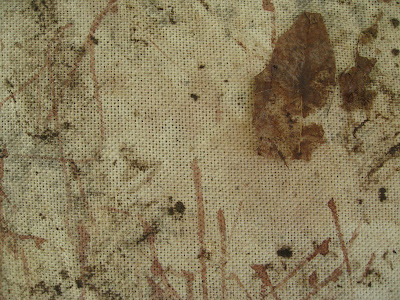 Some of the bigger ‘bits’ were not being held by the fixative and I wanted to keep them on the cloth.

So as my next response, after the tree did its drawing, was to secure the leaves and tree shoots with various types of stitching: closed herringbone, cross stitch, whipping.

I forgot to take a photograph of this stitching before I sent it off to my tutor in the UK. I’ll post images it once I get the work back.

0 thoughts on “Dialogue 2 My Turn”