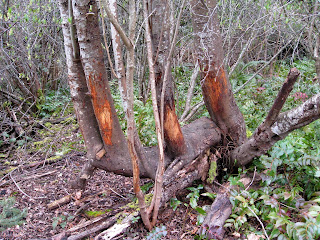 ‘Earth Repair’ began as a response to what I considered to be an emergency situation.
March 11, 2011 – quoting from my journal –
‘Emergency. It has been a long winter here on the island. The deer are hungry. They are eating the bark on my precious Indian Plum. I need to care for this tree. The deer have free choice in the rest of the forest – even my emerging spring bulbs but my Indian Plum is not part of their buffet. 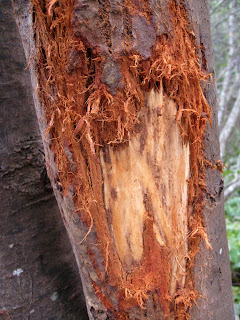 I am placing sacrificial tea cloths over the wounds to protect them. First, I lost my needle – I felt vulnerable and inadequate – I couldn’t do what I needed to do because I had lost my valuable tool. Flashback to an earlier time when women depended on their needlework skills to survive. A lost needle was potentially a loss of livelihood translating to an increased risk of not being able to adequately care for her family. 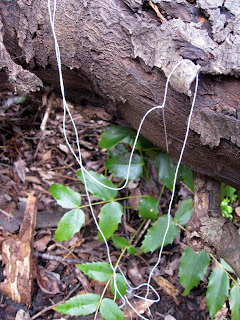 I ran inside to get another needle after I had given up searching in the deep layers of moss and decaying leaves. When I returned with another needle I found my first one hanging by a thread – ties in with that vulnerable feeling again. 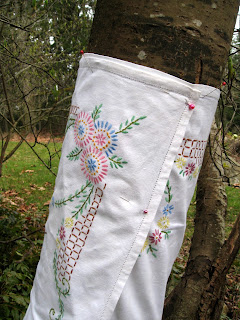 I was having trouble holding the cloth in place and sewing at the same time which had lead to the loss of the original needle. Then I heard a distant ambulance siren reminding me this is a triage situation.
Another run inside to get my wooden-based pin cushion, given to me by my mother. A reminder of how important life skills are passed from one generation to the next.
I was now performing the required surgery as I pushed a couple of pins into the bark to temporarily hold the edges of the cloth as I sutured it in place.’ 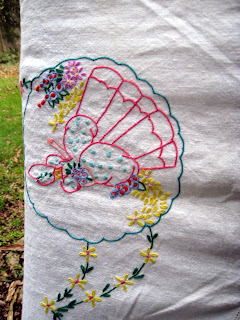 The ‘Earth Repair’ cloth with embroidery wrought by and unknown hand. 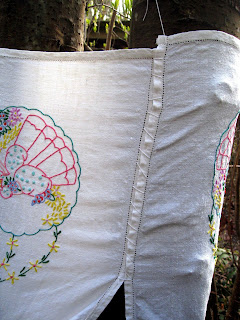 Sutured in place around the wound to stop the deer from eating more of the bark.
I have since read the Saanich First Nations people make a bark tea as a purgative and a spring tonic. Perhaps that is all the deer were doing because they had upset stomachs after having to eat plants not usually in their diet. 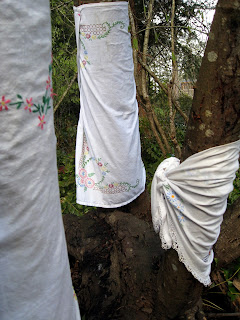 Continuing from my journal entry – ‘The tea cloth continues to function – to protect wood and in doing so sacrifices itself to the elements – it was raining as I secured the cloths in place.
Inside the home, the cloth would be used to present food – outside it is now protecting the bark so the tree can get its food….
The cloth has been taken from the horizontal to the vertical plane. Does it still read as a table cloth? It has been taken from a smooth flat object to a wrinkled curved form. Does it still read as a cloth?’
These were musings for the development of work while I was studying for a BA (Hons) in Embroidered Textiles. After 6 years of study, my graduation exhibition work was related to my thoughts and actions on this Day of the Emergency.