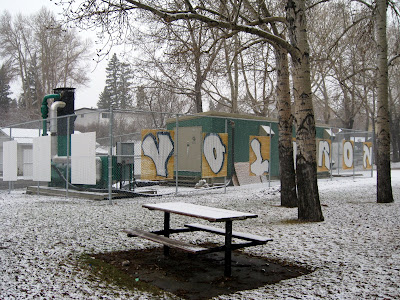 While walking through a park I came across another example of graffiti being used to speak out. North of this park there was a gas station for many years. When it was torn down it was found the underground tanks of fuel had been leaking through the soil into the neighbouring residential area. A big clean up of the polluted soil is underway. The above image is of the temporary station set up to ‘vacuum clean’ the contaminated soil. The company put up white visual screens on the fence surrounding the ‘blend-in green’ buildings.
These white screens were obviously begging to be painted and sure enough it wasn’t long before they were.
The graffiti artist cleverly chose to write one letter on each screen, a word with the same number of letters as screens: VOLTRON
I wonder what the artist’s message is in this word? 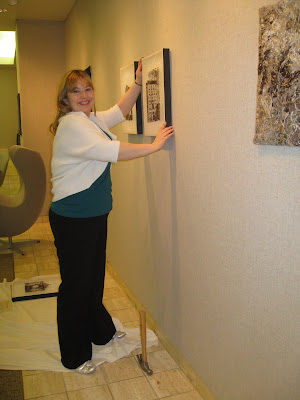 And yesterday more art was put up for public viewing. In this case, not only in a socially acceptable place to have a voice but in a special place to speak as an artist, the McMullen Gallery in the University of Alberta Hospital. Here is Diana Young Kennedy, Gallery & Collection Administrator, hanging Articulation’s latest body of work, Urban Textures.
Vickie Newington and I travelled up to Edmonton to hang the work. I didn’t take photos of the exhibition because when we left at 5:00 to return to Calgary, the lights had not been adjusted and the labels still had to be put up. Next week when we go up for the opening and to run a workshop, I’ll photograph it all.
On April 23rd there will be a workshop from 2 to 4 and the opening will be from 6 to 9 pm.