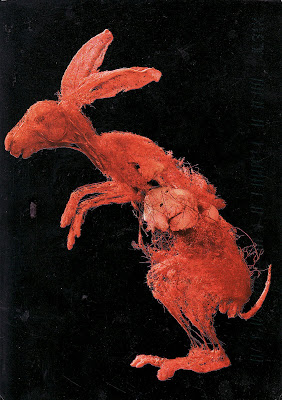 We drove up to Edmonton for Thanksgiving with family. While there we took in Gunther von Hagen’s Bodyworlds exhibition, http://www.bodyworlds.com/ . Over the last weekend the Science Centre was open 24/7 to cope with the crowd of people wanting to see it. Along with the many other procrastinators we lined up and filed in at 10:45 p.m and emerged nearly 3 hours later in a state of awe.

The atmosphere created by the gentle, murmuring, moving, packed in spectators was an experience in itself. The only other time I have experienced such a hushed reverence combined with a vibrating static in the air was when I filed past Judy Chicago’s The Dinner Party.Having spent the summer wrestling with drawing the human body, I was totally absorbed and fascinated by what I saw. I came away with an even greater admiration for artists who can capture the complexity of the human form in a drawing.
The above image is of a rabbit but only its blood vessels. Red plastic was pumped through its entire blood system. Once this plastic hardened, all its organs, tissues, bones etc were removed, leaving the blood system in tact.
If I am ever again anywhere near a Bodyworlds exhibition I will certainly visit it again.