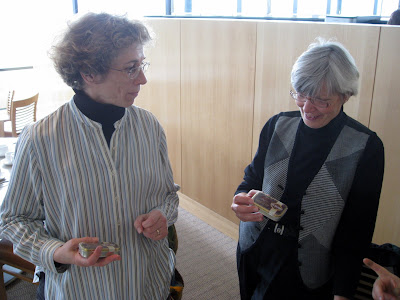 The person next to ReBecca is Jorie Adams. She is a special person. While she was heading up the music & sound department at The Centre, she suggested Articulation apply for a residency & gave us all of the information & contacts required. So we owe her a great deal. She has since retired & is enjoying working a few days a week in a quilt store while she pursues her textile passion. We invited her to have lunch with us one day and showed her our studios & our work up in the Other Gallery. One of Articulation’s strengths is the active support from people such as Jorie. 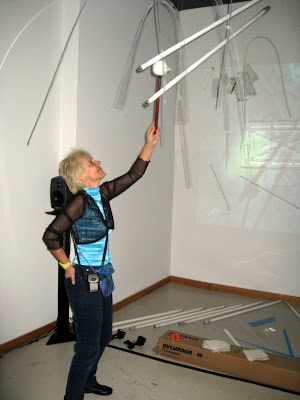 We all attended Flossie Peitsch’s Staged Four where she had modified parts of her installation in the Other Gallery & her studio was open for viewing. Darren Miller had composed music from the sounds pieces in the installation made when struck. Chris Chafe played the celletto & this was added to the music that was played over speakers placed around the gallery. Flossie used a soft mallet to keep suspended fluorescent tubes & strips of plastic moving & so making moving reflections on to the wall. She called it All Things Temporary Time-Lapse Installation and Soundscape. 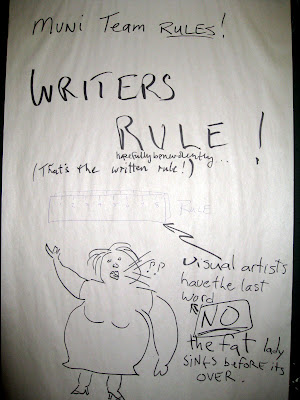 I enjoyed the informal, graffiti-like dialogue that went on on a flip chart kept outside a meeting room. This week’s one was a battle between the different art disciplines.
This was typical of the stimulation found throughout The Banff Centre. There was so much to see, do & hear; so many people to talk to and learn from; so many services & support to enable the artist to work on her own thing -time management turned out to be a much bigger issue than I had planned on having to deal with for the month while in residence.