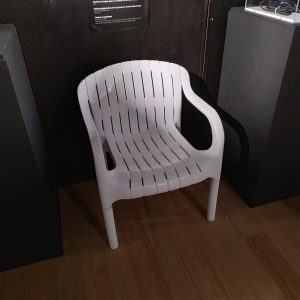 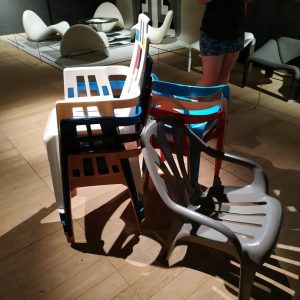 …and its variations found throughout the world.
I have come across this chair in almost every place I have travelled to. It is inexpensive, light, portable, stackable and weatherproof making it accessible to so many people. It has enabled people around the world to sit in comfort alone and in groups, up off the floor to dine, learn, work. We have all seen this chair but have you ever thought about who designed what has become a universal commodity? 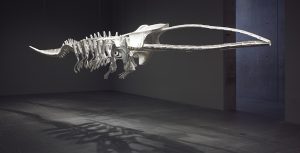 Vienna, 2003, Brian Jungen
Brian Jungen is a Canadian artist who understands the universality of the white plastic chair and has used it in a series of 3 powerful works.
more info on Jungen’s work here
Don’t worry that you don’t know the designer because that is the way he likes it. He wants to remain anonymous and for you to just enjoy living with his designs. 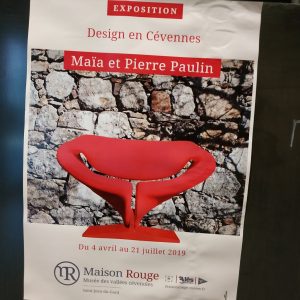 That is why this poster of an exhibition of Maia and Pierre Paulin’s designs caught my attention when we were travelling in the Cevennes region in southern France. We were learning about the history of the silk industry in an old silk factory now the Maison Rouge Museum when we came across a room full of Mid Century Modern furniture. 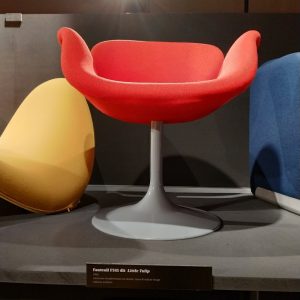 Tulip chair, 1950, Pierre Paulin
It was the French designer Pierre Paulin who designed the white plastic chair and many other iconic chairs and furniture. This room was a treasure trove of his and his wife, Maia ‘s work. 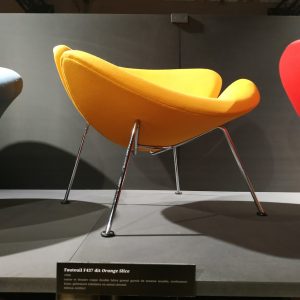 Orange Slice chair, 1960, Pierre Paulin
It was fun to walk through the museum and recognize chair after chair and realise I had never before put them all together as one designer’s work. 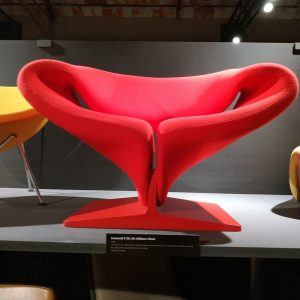 Ribbon chair, 1966, Pierre Paulin
I wondered why this small regional museum had such a large collection of Paulin’s chairs and furniture. I did a bit of research. Paulin was born in Paris and worked internationally but it was in the nearby Cevennes Mountains National Park he ‘retired’ and continued to design. 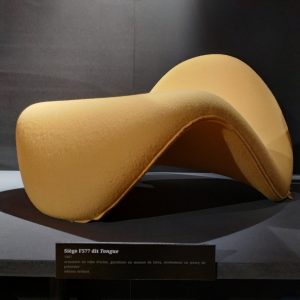 Tongue chair, 1968, Pierre Paulin
Maybe the furniture in this exhibition had come from his home nearby where his wife Maia continues to live. 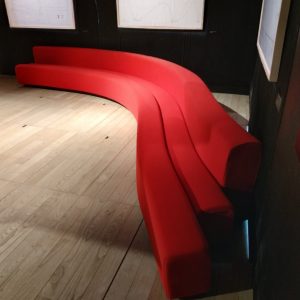 Banquette Amphis or the Osaka sofa (1967), Pierre Paulin
Pierre Paulin left the spotlight of international design several times in his career and worked for many years in his wife’s design company, where he designed utilitarian things such as razors and irons. 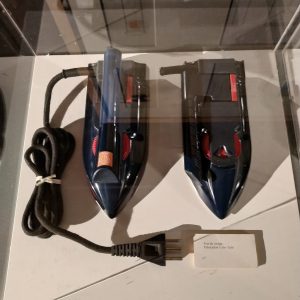 Pierre Paulin’s portable iron design, a first.
He has been quoted as saying “Objects should remain anonymous.”
I wonder how many of the everyday products I use were originally Pierre or Maia Wodzislawska designs?
I need to rewatch some James Bond movies to do some Paulin furniture spotting.