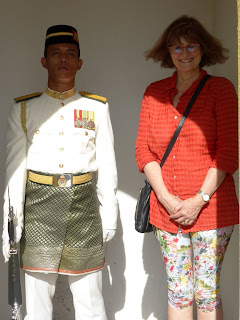 At the end of 2015, our annual family holiday was spent in Malaysia.
Malaysia has lots of things textiley to interest those who are interested in fibres and textiles.
Here am I standing beside one of the king’s guards inside his guard house, where it was in the shade and breezy (hence the flying hair) while it was 34 degrees and body dripping humid in the sun.
The king’s guard is wearing an impossibly clean white uniform trimmed with gold braid and epaulettes. Wrapped over the top of his uniform is a length of cloth secured with a gold belt. It is the traditional Malay men’s garment akin to a sarong and called a sampin. The shimmering cloth is handwoven from either cotton or silk (I didn’t risk bending down to confirm the fibre with that bayonet so close by) with a supplementary weft of gold to make the elaborate traditional pattern. His songkok hat completes the traditional Malay man’s ensemble. 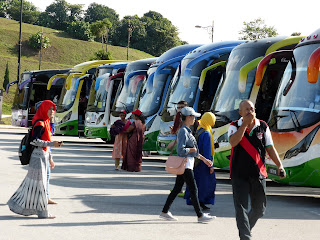 I took this pic to capture the line up of buses that look like colourful ants with their antenna-like mirrors. It was only when looking at the image later I saw I had also caught a sampling of the typical dress worn by people of different races and beliefs.
Left and wearing blue are Muslim Malay women with their body garments covering their whole body except for their hands and head. Their heads are covered with hejab scarves tied and pinned in place.
In the middle are 2 Indian Malays, the left one wearing a Punjabi suit with its full trousers pulled tightly around the waist with a draw string and the pant leg pulled in by a cuff around the ankle. A long, loose fitting simply-shaped shirt is worn over the top.
The other Indian Malay woman is wearing a sari outfit, a 5 to 9 yard length of cloth skilfully wrapped around her body and secured by folding and a tight fitting short-sleeved choli blouse.
Both of them have finished off their outfits with matching baseball caps which may be compulsory wearing for their tour party.
The 2 other people in the image are dressed in the international style found in most countries. 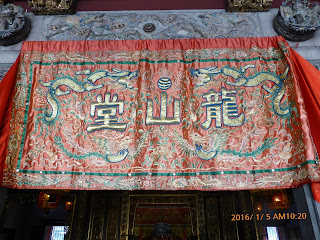 Many of the religious and sacred sights we visited had sumptuous old embroideries.
A banner hung outside a Chinese ancestral worship centre. 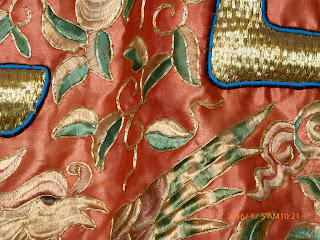 A detail of the above banner shows the traditional Chinese gold and silk embroidery on a silk ground. 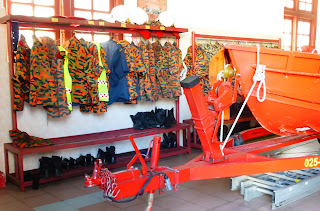 These fire men’s jackets caught my eye. Firstly I wondered why firemen would wear camouflage and I noticed the high intensity colour of the camouflage. Are there two oxymorons at work here? 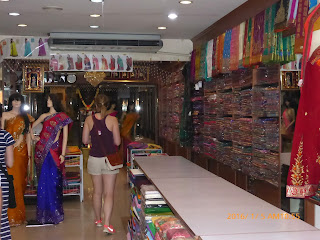 Every city in Malaysia has its ‘Silk Centre’ where the fabric stores are found side by side. Each one is an Aladdin’s Cave (for the Textiley Person) with the regular shop-front opening up as one is lured back into it’s depths, with fabrics stacked floor to ceiling down every narrow aisle. Digging and persistence will lead to the discovery of treasures.