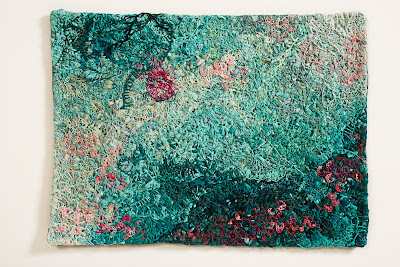 This work is another in a series where i have been using a technique developed by the co-founder and co-principal of the Opus School of Textile Arts, Julia Caprara. (Since Julia’s death the school is known as the Julia Caprara School of Textile Arts, of which I am a student)
.Julia published a series of articles in Quilting Arts magazine where she demonstrated several of her distinctive techniques, if you want to see how this work is done.

The Fireweed plant is known as a ‘first coloniser’ after an area has been disturbed by natural occurrences such as avalanches, floods, fires and man-made disturbances such as forestry, road works, urban development. Fireweed moves in and stabilises the ground so other plants can then take root.

I have continued to explore this natural process of succession and how humans fit in with it as a concept in some of the new work to be shown in Calgary next week. 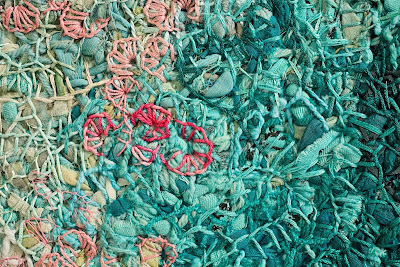 At another level, i see the Fireweed as an enabler and nurturer of others, a traditional role taken on by women in our society, which is why it is appropriate for the work to be made from fabric and thread and stitched, traditionally the media used by women in their homes.

The second story comes form the Blackfoot people. A woman went to a campsite of a group of braves who had captured and tied up her lover. She started a fire in the prairie grasses at one end of the camp to distract the braves and ran around to the other side of the camp to untie and rescue her lover. They both then ran across the prairies and headed for the mountains.
When the braves had worked out how they had been tricked, they started to chase the couple. They were gaining on the couple until they came across a string of fires that blocked their way. The fires sprang up where ever the woman’s moccasins touched the ground and so protected them from getting caught. After the fires died down Fireweed grew in the place of her footsteps.

If you look at any image of the Fireweed you will see magenta flowers and blue-green leaves. In this work i really pushed the intensity of these colours because i wanted it to appear strong and full of life.