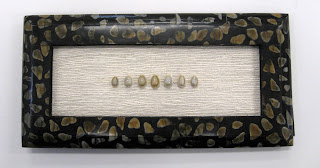 ‘Currency’
I have a series of new small works currently out there in CACSP’s Tulista Gallery exhibition ‘Small Expressions’ and VISDA’s ‘Current Threads: Garden Tapestry’ at South Shore Gallery.

‘Currency’
‘Currency’ is about how many early tribes first used shells for money when trading commodities.
The most common shell was the cowry, (Cypraea moneta) but other types were recognised and used in trade. 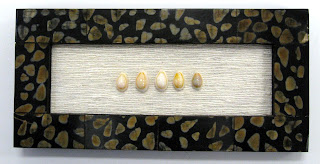 ‘Currency’
One of the most influential commodities that drove early trade and established the first trade routes caused wars and stimulated government laws was textiles.
I put the shells on silk, one of the most highly prized textiles.
The silk used in ‘Currency ‘ is hand spun, hand woven wild silk I bought back from a textile tour of NW India.
The horn frames reference the on-going illegal commodity trade of rhinoceros horn with China leading to the near extinction of the animal. 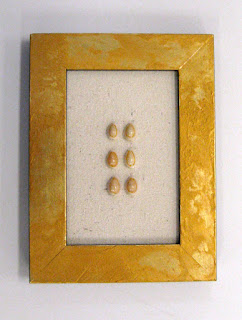 ‘Currency’
These cowry shells are on a silk textile with a gold coloured frame.
Gold is a commodity many are familiar with and it was probably the first international currency.
These two exhibitions gave me the opportunity to explore an idea. What is the simplest way I could tell a story? I challenged myself to take a complex story and to pare it down to the minimum of elements needed to tell the story.