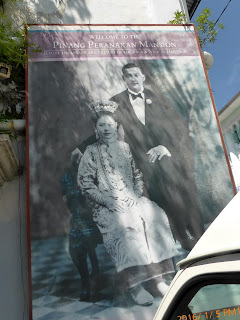 Georgetown, the old part of Penang, is a well-preserved UNESCO World Heritage Site. There one can explore a unique culture that began in the 15th century when the Straits of Malacca was one of the busiest shipping routes in the world. Chinese migrated from southern China and settled up and down the Malay coast and into Indonesia. They married the local Malays and over time developed a distinct culture reflected in their houses, clothing, customs and cooking – the Nyonya-Baba culture. Here is a link to a Nyonya’s blog where she explains her origins.
The above image is outside an award winning restored Nyonya Baba mansion in Georgetown. It shows the Baba (the man) in typical Western formal men’s dress of the day while the Nyonya (the woman) wears the traditional garments of her culture.

An elaborately embroidered blouse is worn over a wrapped sarong. 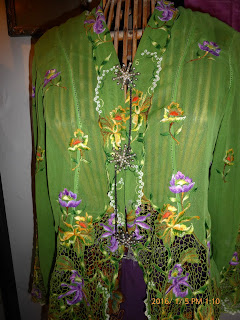 The sheer fabric is silk crepe or Swiss lawn embroidered with silk thread in satin stitch and long and short stitch. The area around the hips is edged in buttonhole stitch before the centres were cut out to make intricate organic patterns. The blouse is secured with 3 to 5 elaborate, jewel-encrusted pins.

The fitted shape with the long front is typical. It certainly emphasised the wearer’s main role in life – to produce heirs. 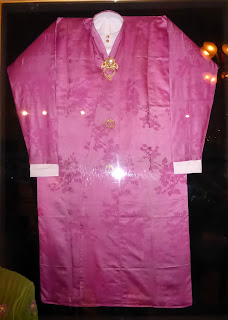 However, when the woman turns 60, after 5 cycles through the Chinese horoscope, she refits her wardrobe with simpler more boxy garments usually made in heavier more opaque fabrics.
The under garment has a starched raised collar like the stay of a men’s shirt and it is held together with gold studs as found on 19th century western men’s formal wear. This shift to clothing elements normally worn by males is interesting. In this matriarchal society, as she ages and becomes a grandmother the woman’s role changes from child bearer to being head of her family. 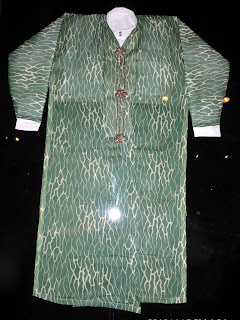 She still wears her costly pins, kersang, to show her family’s position in society. The Nyonya line began with a Malay born woman who owned the land and passed ownership on to her daughters, giving them long-lasting and legal authority. At the same time, the Chinese-born immigrant Baba set up the business and if  he was successful brought wealth to the family – a powerful combination. 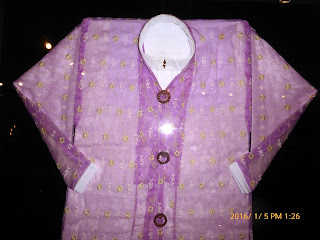 A 1930s matron’s/grandmother’s over garment made from apple green embroidered flowers on lavender Swiss organdy. The 3 pins are circles covered with gold and rubies.
The starched collar of the under garment has gold studs. 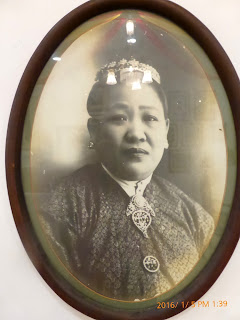 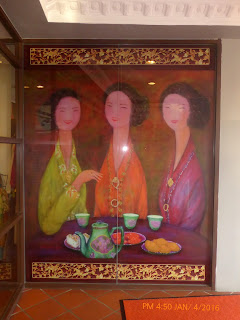 The wealthy Nyonyas were expected to master the skills essential for finding a good husband – an effective beauty regime, how to behave in public, and how to run a household.
Above is a painting on the side of a Georgetown building of 3 Nyonyas having afternoon tea. 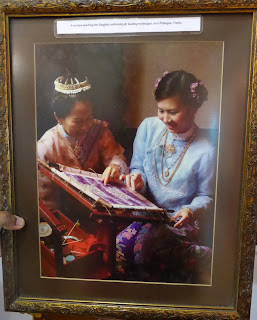 In several museums, I did notice it seemed pretty important also to learn how to master bead embroidery because one was expected to make one’s own bridal shoes.
Here is a mother teaching her daughter to bead. The daughter’s unmarried status is evident by her side-buns hair style. Her married mother wears her hair in a single high bun. Gold, silver and jewelled hair pins, Cucuk Sanggul, are worn in the buns. 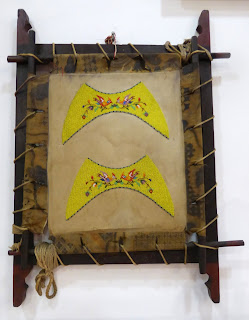 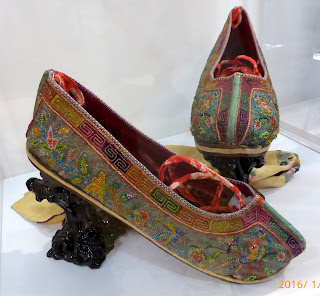 A pair of velvet beaded bridal shoes, embroidered with phoenixes and peonies, made sometime before the 1930s. 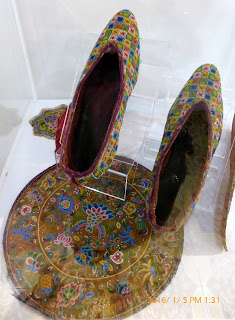 A pair of beaded pink and green check bridal shoes made in the 1920s or 1930s.
This culture was very open to new ideas and trends. Trade ships brought the latest commodities and luxuries from around the world and the wealthy travelled to other countries. Evidence of this can be seen in the Art Deco influenced design this modern bride worked on her beaded shoes compared with the more traditional floral design seen displayed under the shoes.
I must say my family was very patient as I absorbed and documented what we saw in the museums we visited. They would even come and find me if they saw something they thought I might be interested in. I am so fortunate to be fully supported by my family in what I do.