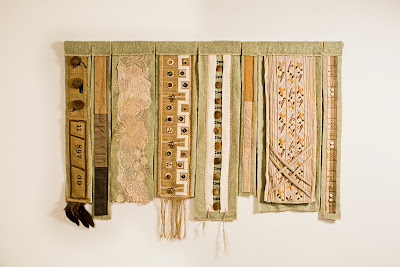 Yesterday i put 77lbs of art (plus box) on a Greyhound bus, bound for Calgary and the Calgary Quilt Association Biennial Conference in the Telus Convention Centre. Articulation has been invited as special guests to put on a huge display of their work, most of it never seen before in Calgary and a whole body of work inspired by Vancouver Island’s rain forest ecosystem that hasn’t been seen by the public yet. In fact, Articulation members haven’t even seen this work together yet. It is always exciting to bring new works together for the first time, knowing they have all been inspired by the same location.
I can’t talk about this new work yet but i can tell you the narrative of one of my works that has been shown in Winnipeg. 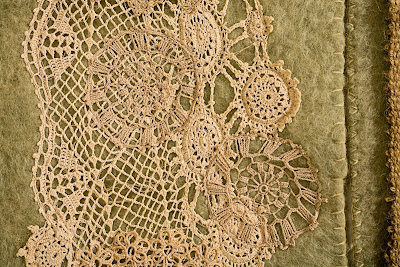 ‘Provisioning’ was inspired by Articulation’s study week in Winnipeg. During our research in the streets and buildings of Winnipeg, I noticed how important textiles had been in the development of Winnipeg as the ‘gateway to the west’ and how  the city went on to become one of the wealthiest cities in North America from 1880 to 1920. Yet, I couldn’t find out very much about the people who made these textiles. It seems their contribution has not been recorded.
‘Provisioning’ is my tribute to those unsung, unknown textile works who made such a valuable contribution to the success and wealth of Winnipeg. 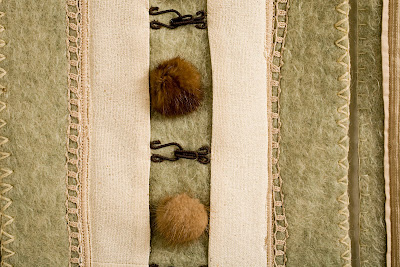 Textiles were needed to carry the dried food staples and animal feed for Europeans to be able to survive a year on their allocated block of land before they could claim it as theirs. Textiles were needed to hold the valuable seeds of the first crop to be planted on the land. Blankets and furs kept the immigrants alive during long sub-zero winters. A multitude of domestic linens were used to run households where we now use plastics and disposables. Clothing was woven and knit in the home, if one had the skills or couldn’t afford to purchase. Businesses set up in Winnipeg to provide families with all of these vital textiles.
Women did ‘fancy work’ to beautify their homes, such as table cloths and doilies to protect the few pieces of furniture they had.
There is a lot more to this story in ‘Provisioning’.
If you would like to learn more or you would like to share with me your family’s ‘Provisioning’ story, which i would love to hear, come down to the Telus Convention Centre, April 27 to May 1st. I will be there most days. I’ll post here the actual times and when i am scheduled to give an official ‘artist talk’.