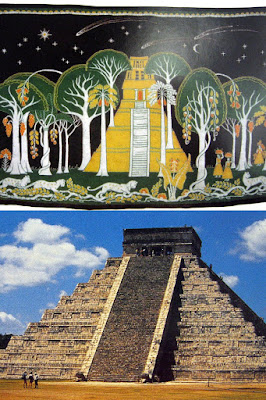 An interesting feature of step design use during the Art Deco period is that even though the ancient source of the inspiration was so obvious, the art, architecture and fashion garments were celebrated as something refreshingly new.
Here is a silk painting obviously inspired by recent discoveries of ancient buildings found in the jungles of Central America. 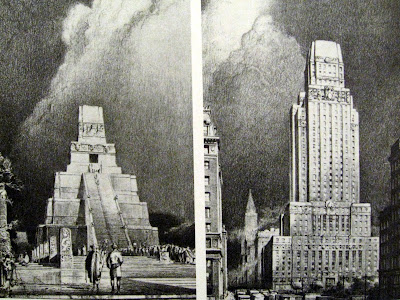 A Mayan temple compared with an early Chicago skyscrapper. The architect who designed the building on the right even copied the wide band on the top part of the tower on the left. Both cultures constructed buildings to literally reach up to touch the sky. Both buildings were the tallest, in their day. 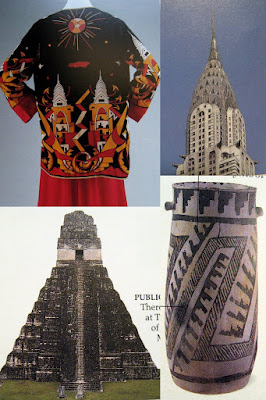 Here are some possible sources of inspiration for a silk jacket made by an unknown American designer: the revolutionary Chrysler tower, Aztec temple and an Anastasi basket. All feature step designs that create an uplifting feeling of reaching for the light. Step design could be interpreted as a symbol of optimism and hope. It would be interesting to see if this is so in the work of other cultures that have used the step design element.

0 thoughts on “Step Design is Something New”