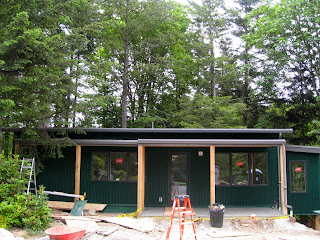 Pattern Language # 116 Cascade of Roofs
Few buildings will be structurally and socially intact, unless the floors step down towards the ends of the wings, and unless the roof, accordingly forms a cascade (p. 566).
The studio, relative to the house, is a small and simple building yet the architect, Jonathan Aitken, managed to work in three different roof levels at three different angles. 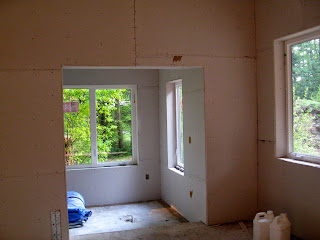 Inside the floor steps down towards the south end of the building reinforcing this pattern. 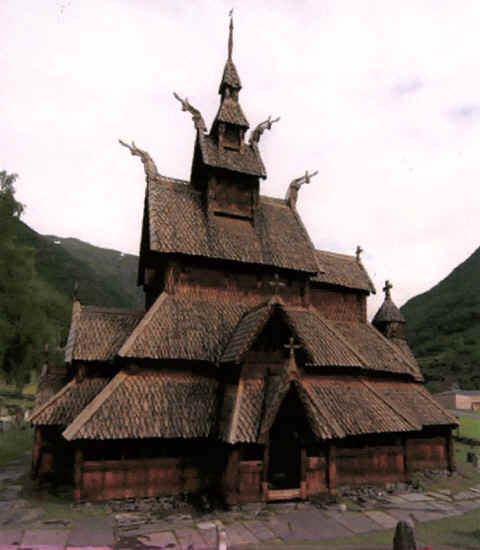 Here is a classic example of the Cascade of Roofs, a stave church in Norway. The roof shape also emphasises the entrance as in Pattern # 110 Main Entrance which I discussed in the previous post.
This building also illustrates Pattern #117 Sheltering Roof where the eaves are low enough to the ground they can be touched.
The solution to the Cascade of Roofs pattern is to visualise the whole building, or building complex, as a system of roofs. Place the largest, highest, and widest roofs over those parts of the building which are most significant (p. 568). Jonathan most successfully satisfied this pattern for the studio.
Pattern #117 Sheltering Roof
The roof plays a primal role in our lives. The most primitive buildings are nothing but a roof. If the roof is hidden, if its presence cannot be felt around the building, or if it cannot be used, then people will lack a fundamental sense of shelter (p. 570).
The Pattern Language research team have concluded this is one of those patterns (along with #110 Main Entrance and others) that describes a deep and inescapable property of a well-formed environment (p. xiv). This pattern has a profound effect on the building.
The sheltering function cannot be created by a pitched roof, or a large roof, which is merely added to the top of an existing structure. The roof itself only shelters if it contains, embraces, covers, surrounds the process if living. This means very simply, that the roof must not only be large and visible, but also include living quarters within its volume, not only beneath it.
How does the studio measure up to this pattern? 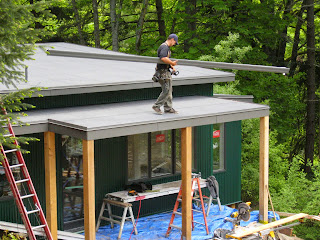 The studio building is most visible from the main rooms of the house which are on the upper level. From this viewpoint, the studio roofs form a massive part of the building. Check. 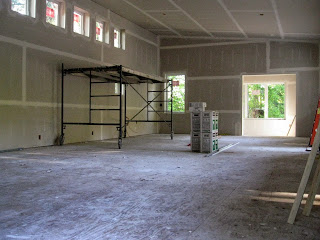 Another requirement of the pattern is the space under the roof must be useful. A space used every day. In the studio building the slope of the main roof and the height of the corresponding east wall was decided by the size of the design wall I wanted and the need to have a set of high, opening windows as part of the passive solar ventilation system. I will be working daily under the roof – check.
The height and width of the porch roof was dictated by the angle of the sun shining into the building. Jonathan did a lot of computer modelling to work out the optimum angle of the main roof and the height of the different walls. He looked at the different times of the day and different times of the year before settling on the dimensions of the walls, windows and roofs.

The view from the main room down into the sunny room gives the feeling the of being surrounded by the lower roof. The top of the opening into this room can be touched which is the third requirement of the pattern. On the outside of the building, this part of the pattern is not present. Though the porch roof is lower than the main roof I can’t touch it. It was a compromise because I needed the natural light to go far into the main room where I will be working and this sunlight is needed to heat the solid mass of the 8″ thick walls and heat the interior space as part of the passive solar heating system.
The solution to this pattern is to slope the roof or make a vault of it, make its entire surface visible, and bring the eves of the roof down low, as low as 6’0″ or 6’6″ at places like the entrance, where people pause. Build the top story of each wing right into the roof, so that the roof does not only cover it, but actually surrounds it (p. 573).