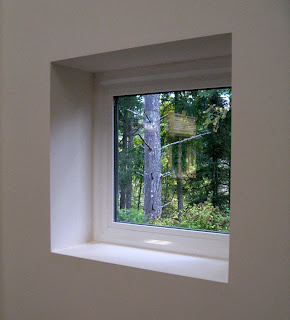 Pattern Language #134 ‘If there is a beautiful view, don’t spoil it by building huge windows that gape incessantly at it. Instead, put the windows which look onto the view at places of transition – along paths, in hallways, in entryways, on stairs, between rooms.
If the view window is correctly placed, people will see a glimpse of the distant view as they come up to the window or pass it: but the view is never visible from the places where people stay.’ 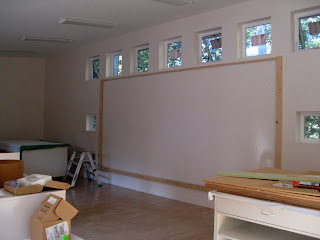 The Green Shed has two Zen windows, one either side of the design wall. Jonathan Aitken, our architect, did a great job in locating them. The project table and print table are mostly kept (they are on wheels) in front of the design wall. As I work and walk around the tables I catch glimpses of forest views. A glimpse is enough to keep me connected to the outside without being a distraction from the work in hand.
Not long after I moved in I was distracted by a familiar knocking sound. Curiosity made me go up to the nearest Zen window. 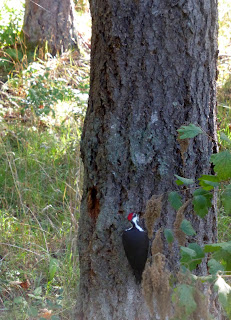 A Pileated woodpecker was at work on a tree we hoped would become a wildlife tree.
The tree had shown signs of decline after the nearby 12-year-old septic field was keeping its roots too wet. Douglas-fir like to spend most of the year with dry feet. Several of its neighbours had blown over during winter storms. We didn’t want this one to fall on the studio so it got cut down before it fell down.
The knowledgeable lumberjack left a 20-foot high stump and roughened up the top with his chain sawn. We hoped the tree was large enough for the fauna to think it was an ideal wildlife tree.
I was so delighted when I heard that knocking sound. I knew what it meant. 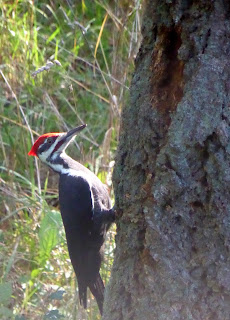 This bird had decided the tree was suitable to work on. Above right you can see their characteristic rectangular shaped hole which opens up the tree to other birds and insects as a food source and nesting sites. The hole gives access to fungus colonies that soften and rot the wood. Then the next succession of smaller birds can work on making nest sites and foraging for food.
It is for these and many other reasons the Piliated woodpecker is a Douglas-fir forest keystone species.
Pileated woodpecker – Keystone Habit Modifier
Click the above link to read a scientific examination of the importance of this bird for the wellbeing of the Coastal Douglas-fir ecosystem.