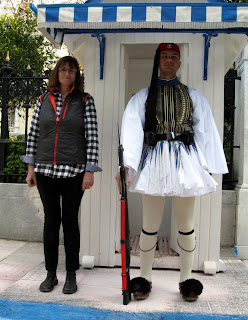 Here is one of those pesky tourists standing beside one of the famed Greek Evzone – guards of the Tomb of the Unknown Soldier and the president’s mansion, dressed in his Sunday uniform.
To join this elite division of guards one has to be over 6′ 1.3″/1.87m tall. 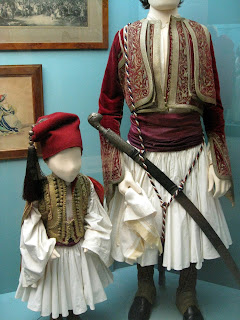 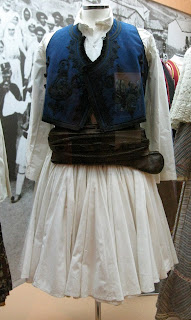 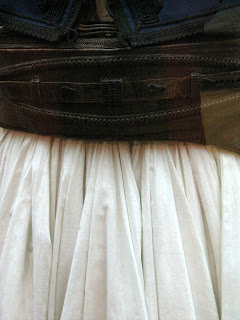 The guard’s uniform evolved from the Klephts’ traditional clothing.
The Klephts were Greeks who avoided Turkish rule by escaping to live in the rugged mountains. While surviving as thieves they formed the core of the resistance to the Ottoman occupation of Greece and with Greek independence became national heroes.
Costumes in the Nafplion Museum. 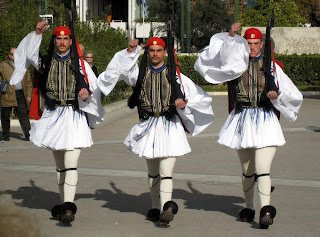 Of the 12 parts of the uniform, the most striking and symbolic is the kilt-like skirt – the fustanella. Made of a 98’/30m length of cotton, each soldier irons in 400 pleats then his partner helps him to belt it to his waist. The 400 pleats symbolise the 400 years the Greeks endured Ottoman occupation.
The blue and white waist fringe, also held in place by the belt, are colours symbolising the modern Greek nation, the colours also in the national flag.
Over a white cotton long-sleeved shirt is worn another white shirt – the ypodetes – with its very wide long sleeves that billow out as the soldier marches. 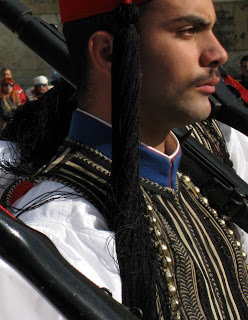 The scarlet, wool fez – the farion – has a long black silk tassel. The soldier’s aim is to hold his body upright while marching to avoid tangling the silk tassel. 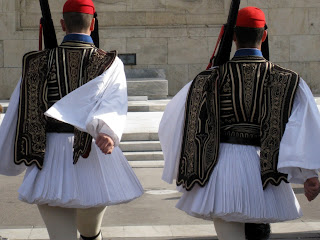 The waistcoat – the fermeli – is densely hand embroidered wool. Traditional designs are worked in white and gilt thread. One of the coded messages in the embroidery is the military rank of the wearer. 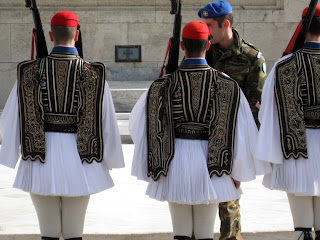 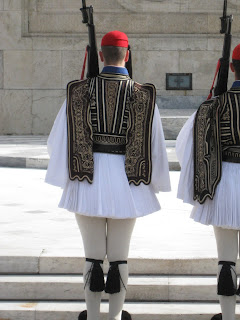 Silk tassel garters, 2 types – the epiksclides and the anaspastos –  hold in place 2 pairs of white woollen stockings – the periskclides. 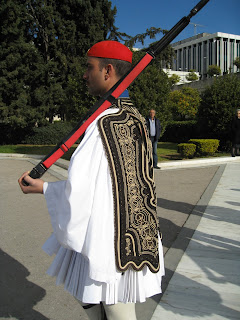 A rifle with a bayonet is part of the uniform. 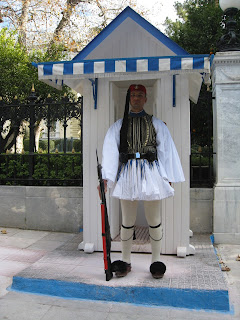 The red, leather clogs – the tsarouchia – have a pointed toe adorned with a black pompom. One source says the pompom is to keep water out of the hand sewn join where the 3 pieces of leather meet at the toe. It is also known as a place to hide a small blade.
Each clog has 60 nails embedded in the sole and a horseshoe-like metal plate on the heel. Apart from making the clogs very heavy, up to 7 lbs, the nails help the soldier from slipping on the stone tiles. As a group of soldiers raise their right legs high then strike the ground forcefully with their clogs it is said to make a sound of war.
This year our family holiday was spent in Greece.