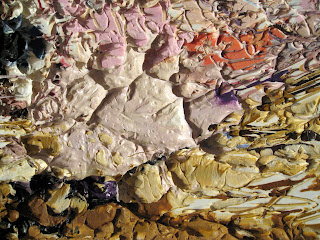 After attending the Textile Society of America Symposium in Savannah Ingrid and I flew up to Washington DC with the intention of checking out the newly relocated Textile Museum now on the George Washington University campus. Unfortunately, our timing was not great. We could only enjoy the shop because the gallery was closed while a new exhibition was being installed.
We visited the Renwick Gallery. I didn’t take my camera because I wanted to focus on looking at the work and thinking about it. Sometimes while I am taking pictures/photographs I feel as though I am missing out on the full experience.
We also visited the outstanding National Museum of Women in the Arts and spent many hours working our way up through the floors of the gleaming marble building.
On the top gallery floor, we thoroughly enjoyed the current contemporary exhibition “No Man’s Land – Women Artists from the Rubell Family Collection” where the work was often provocative, cheeky and humorous, as its title suggests. 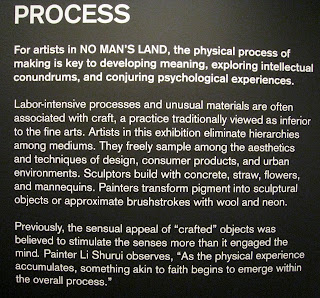 I particularly enjoyed artists whose use of particular materials was intriguingly icky and so full humour. 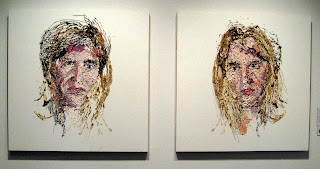 Karin Upson’s ‘Kiss 8’ is part of her ” The Larry Project.” There is bit of a weird story about Larry which led her to paint a portrait of Larry and at the same time a self-portrait. While both portraits were still wet she pressed the 2 together creating ‘a pair of unsettling hybrid faces.’ 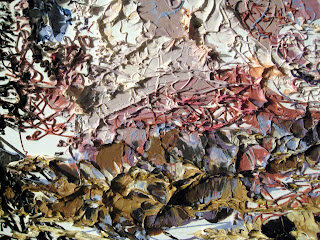 The paint was so thick and textured one had to step back quite a distance before the faces emerged. 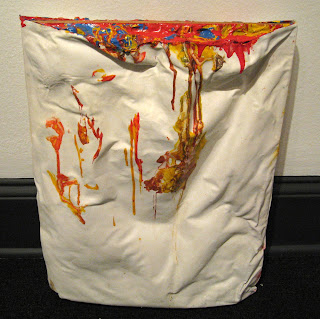 Analia Saban’s ‘Acrylic in Canvas’ was so tongue-in-cheek. The paint wasn’t on the canvas as is ‘normal’ with fine art, instead, she filled a canvas bag with paint so it was in the canvas. It was kind of icky while at the same time humourous. 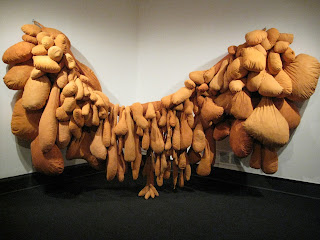 Solange Pessoa’s ‘Hammock’ looked from the entrance to the room like the suspended intestines of a huge beast. But it was not what it seemed. On closer inspection, the materials were familiar: fabric earth and sponges. Up close the mass and scale were somehow comforting which was a huge shift my first impression. 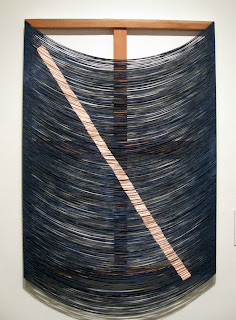 Dianna Molzan’s ‘Untiled’ is work toying with the definition of fine art as paint on a stretched canvas mounted to look as though it is floating against a wall. Dianne took each of those elements and played with them. She removed the vertical threads from the canvas while leaving the horizontal threads mounted conventionally to the stretcher bars. Then she applied paint to the remaining draped threads. I enjoyed the way she had cleverly brought together the fine art expectations with the materiality of craft and women’s detailed repetitious work. 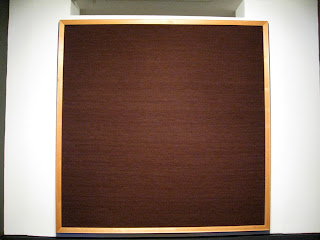 Rosemarie Trockel’s ‘Colony’ is another play on the definition of what is fine art. From a distance, her work looks to be worked in the Colour Field style where large blocks of flat colour cover the stretched canvas. 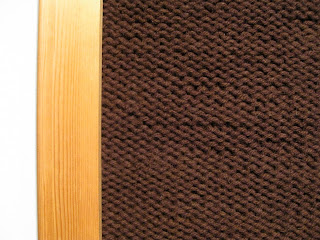 Closer inspection reveals it is not what it seems and so questions the definition of fine art.
Rosemarie is quoted as saying, “I tried to take wool, which was viewed as a woman’s material, out of that context and to rework it in a neutral process of production.”
Lots of food for thought.