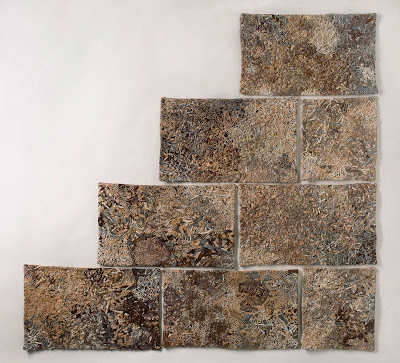 ‘Walls Talk’ has come back from South Korea where it was in the Canadian pavilion at the 2009 Cheongju International Craft Biennale.
It is made up of panels in the same Julia Caprara technique as ‘Meadow’ but in this work it is the actual materials that tell the story.
The theme of the Canadian exhibition at the biennale was ‘Unity and Diversity.’ With this work I commented on the nature of Canada’s population and geology in those terms. 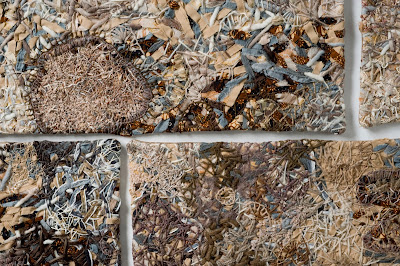 This is the artist statement for the work.

A wall is built of Tyndall stone, distinctive and unique to Canada. Fibre is stitched to suggest the myriad of marine life in the vast sea that covered central Canada, now captured in limestone. Also known as Tapestry Stone, the blocks tell the story of European settlement of western Canada.
Unlike traditional Fibre craft work, where the emphasis has been on the demonstration of mastery of technique, I have worked with minimal technique to focus on the materials as content. I acknowledge the intrinsic meanings in each textile to provoke the viewer’s memories of their own textile experiences. My goal is to stimulate a dialogue between the work and the viewer. 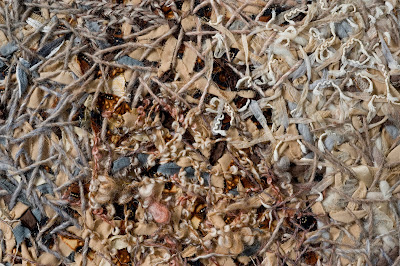