Domestic teatowels made of linen or cotton have been surprisingly uniform in size over the last ninety plus years. Perhaps they are the width of a household table loom.

Previously they were all woven in the home now they are mostly machine woven and printed. The majority of printed teatowel themes are limited, remarkably, to four subjects: a prayer, an uplifting saying, a calendar or a momemto of place for the emigrant or tourist.
For this work, I chose two different linen tea towels featuring the same prayer – ‘Bless this house Oh Lord we pray. Make it safe by night and day.‘ They also have calendars for different years in the 1970s.
I added the silhouettes of two WWII planes, one the Allies’ Avro Lancaster and the other the Reich’s Heinkel HE 177. The bomber planes look as though they are zeroing in on the houses, highlighting the significance of the prayer. 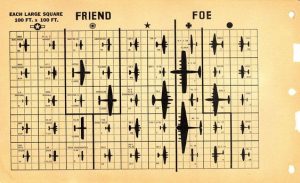 Plane spotting was a skill of memory and fast recognition developed by psychologists during the war once they realised fast and accurate recognition of airborne planes saved lives. They found rather than doing a laborious detailed analysis other parts of the brain could be used for rapid assessment of the shape, engine sound, and markings of planes overhead. Sheets of plane silhouettes were issued to military personnel for plane spotting training and members of the public were encouraged to learn them as well.
A short video to show the distinctive sound and shape of the Lancaster. Sorry about the ad.
https://www.youtube.com/watch?v=yTQIUEa4cqA 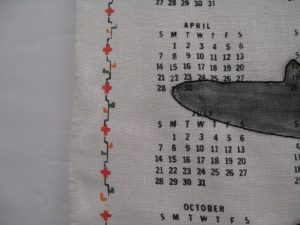 With three of Florence’s sons in the airforce, I image it became a household game to be the first to correctly identify a plane overhead. 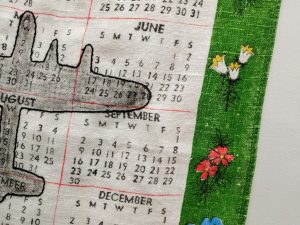 I also imagine Florence outside hanging out her washing and hearing a plane. She would search the skies to identify it as a friend or foe. Was it one of her sons in-training taking the chance to fly over his home and say hi to his mother with a dip of the plane’s wing or was it an enemy plane, a scout or the beginning of an enemy invasion?
The routine domestic task of hanging out laundry was yet another trauma trigger capable of switching Florence’s emotions to a surge of joy stimulated by the mother-child bond and just as quickly her emotions could plunge downward in fear. She would become exhausted by the repeated involuntary acute stress response known as fight or flight. 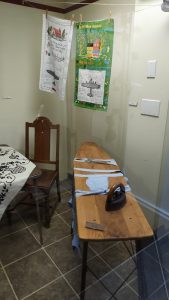 I changed the dates to 1943 and 1944, the years Florence’s oldest son flew Lancaster bombers. 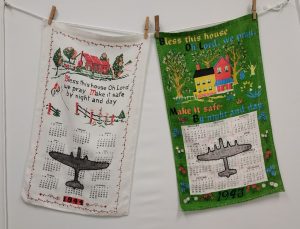 This is the work’s story I told in the Sidney exhibition booklet
‘Plane spotting was an activity the War Office encouraged the public to practice. War psychologists knew that when the skills of memory and fast recognition developed in the civilian population it saved lives. Recognition posters were issued to aid in aircraft identification. I can imagine Florence’s four sons making a game of plane spotting, and she too learned the skill. When she heard a plane while at her clothesline she would say a silent prayer asking God to protect her three sons in the airforce. Then her mind with flip with fear at the possibility of it being an enemy plane and the beginning of an invasion. It was only after researching this work that I realised the significance of my father’s enjoyment in taking his family to airfields for picnics. He had continued to hone his plane spotting skills and taught his children to recognise planes by engine sound and silhouette.’