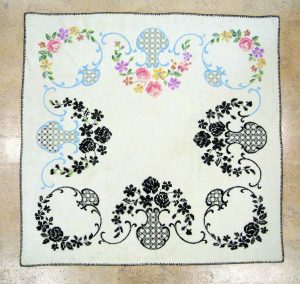 Grief Redacted
Vintage linen tablecloth, cotton thread; hand embroidered.
For my installation in Articulation’s ‘WAR: A Personal Response’ exhibition I have recreated my grandmother’s living room to reflect her mental state during WWI, WWII and the following years. I believe she suffered from Post Traumatic Stress Disorder (PTSD) most of her adult life. The room I have created tells her story.
Grief Redacted is a tablecloth laid on a table set for tea. The colour of the embroidery chronicles her decline into PTSD. 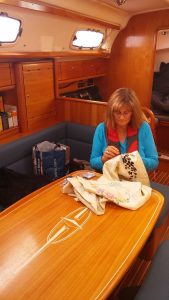 Stitching on a boat.
The cloth chronicles my grandmother Florence’s life so I decided to make it a part of my life. I took it with me where ever I went and worked on it whenever I could. 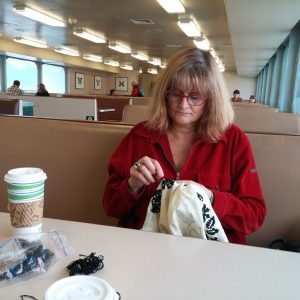 Stitching on the Coho ferry en route to the USA. 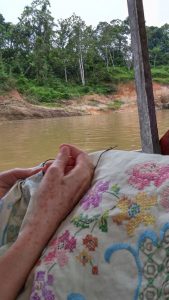 Stitching on a riverboat in the Malaysian Highlands. 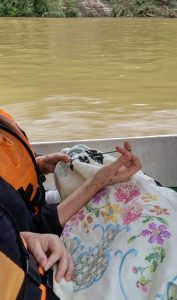 PTSD symptoms unrecognized and untreated can be passed on to future generations. Florence’s great-granddaughter Elizabeth added her stitches to the cloth. In total nine of Florence’s descendants worked on the cloth to illustrate the wide-ranging and long-term effects of PTSD within a family. 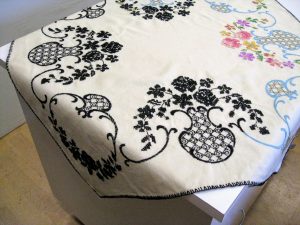 The brightly coloured flowers reflect Florence’s happy relationship with her high school sweetheart until he headed off to war. The flowers turn black from worry as she waited. After his joyful return, their marriage and the births of their 4 sons, the colour returned to flowers. Following the tragedy of her “shell-shocked” husband committing suicide, three sons joining the Air Force and the oldest son dying in a plane crash, she stitched only in black. Guided by her religion, bound by nationalistic cries of ‘for God and country’ and deep down being tormented by humanist feelings of guilt and shame, Florence suffered from PTSD as the battle raged within her home.
Links to works by other Articulation artists in the ‘WAR: A Personal Response’ exhibition:
Donna Clement here
Wendy Klotz here
Amanda Onchulenko here