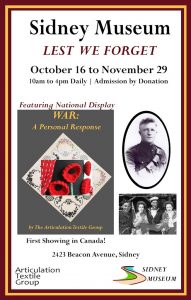 Articulation is very pleased to be exhibiting in the Sidney Museum, Sidney, British Columbia from October 16th to November 29th, 2018.
The exhibition coincides with the 100-year commemoration of the signing of the Armistice Treaty, the official end of World War I in Europe.
While the museum will feature displays full covering Canada’s history of involvement in wars until the present day peacekeepers, Articulation will be taking a more personal look at war.

Unlike other studies where Articulation members research together, this war project research was done in their own time. It involved talking to family members to gather war stories and searching through family archives for war-related memorabilia.

I found other source material in many different places.
War displays started popping up in front to me when I wasn’t expecting them such as the informative war display in the Mary Winspear foyer, in Sidney.

Around Remembrance Day there were moving displays to think about.

I studied uniforms in military museums.

I photographed war memorials whenever I saw them. This one is in Blenheim, New Zealand.

I caught this one in passing on a rainy day.

I began to recognise their familiar shape and looked out for them in every small town we passed through.

I was particularly interested in the airforce because my uncles enlisted.
Google is a treasure trove of early war photographs that say so much.

I visited war museums in England, New Zealand and Canada because they all played a part in my family’s war stories.

I was particularly interested in learning about the Lancaster Bomber because my uncle flew one. I visited the Bomber Command Museum of Canada link in Nanton, Alberta. They have one of the last Lancaster Bombers and allow the public to climb up inside the plane. I was able to sit where my uncle would have sat.

I began to focus on the textiles of war. It was something I could relate to.

I found the uniforms most interesting.

I studied the materials, the construction and how items were attached.

I read a number of books and watched many documentaries on war.
It became overwhelming. I let ideas percolate and captured them in a large notebook. In time a theme emerged.
I began developing my ideas while collecting materials. I asked people to help me collect specific items. Carol bought me auction lots of military buttons and uniforms. Barbara gave me her husband’s airforce uniform to work with. Friends gave me their husband’s and father’s worn and stained handkerchieves. I live in a very supportive community for which I am so grateful.
I do hope you can make it to the exhibition in the Sidney Museum where you will be able to see how all 6 Articulation members went through a similar process before they were able to begin to tell their personal war stories.