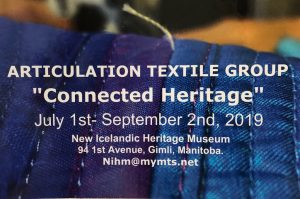 The exhibition is on all summer at the New Icelandic Heritage Museum in Gimli Manitoba. 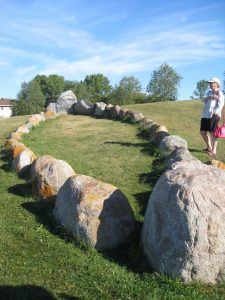 Research for this body of work began with a study session covering Winnipeg, Gimli and the Inter-Lake area of Lake Winnipeg. I posted earlier about the trip here and here. When we Articulation members were back in our respective studios, we got to work sifting through all our research materials narrowing down a mass of images, stories and information to a focus which caught our imaginations enough to want to go deeper while being guided by the “Connected Heritage” concept the group had settled on. 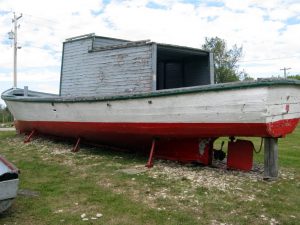 While out and about exploring I was enamored with the boats and the unique way of fishing. The Icelandic people had brought with them their way of fishing and learned from the First Nations people how to adapt from the sea to an inland lake. Other settlers such as the Ukrainians and Scots also contributed their knowledge to make InterLake fishing the unique industry it became. 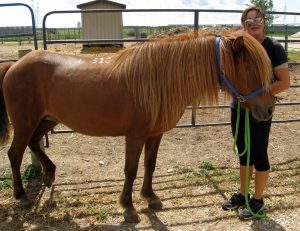 And I loved everything about the Icelandic horses. I watched all of the movies I could find where they starred and I found several documentaries on them.
But as is usual for me after an Articulation Study Session, once I got home and into my studio, my interest was piqued by a different subject. Part of my ongoing research involved reading about the history of the Icelandic people and I focused on their unique DNA heritage that has been studied in great detail. A long isolated human population with written records going back centuries can tell geneticists a lot. This knowledge can be applied to the benefit of other populations, for example, understanding the origins of genetic diseases enables diagnostics tests and drugs to be developed.
I became intrigued with the way a group carries its genetic identity with them no matter where they settle and their cultural identity is carried in their material possessions.
Recent genetic research has confirmed what the sagas have been saying for generations. Genetic research has come up with the statistics. Seventy-five percent of the males in the founding population was Scandinavian, mainly Norsemen. Fifty percent of the founding females were Celtic from the western coastal areas of the UK. It seems the bachelor Norsemen picked up Celtic wives before heading across the sea to settle in Iceland.
The Icelanders brought this genetic heritage with them when they settled in the Canadian Inter-Lake area. They also brought their cultural identity embedded in the few possessions they brought with them.
I decided to work with well-worn woolen blankets, essential items they may have brought with them. I projected an image of an old woodblock print onto the blanket then cut the image away suggesting how their cultural identity is embedded in their material culture. 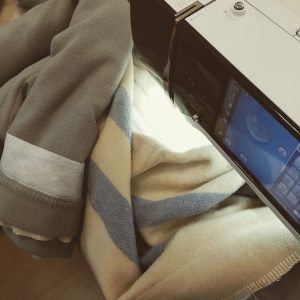 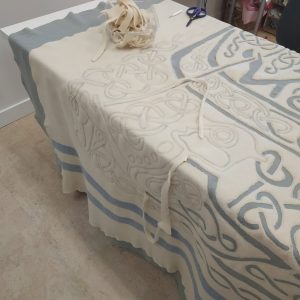 Cutting out the design to show the backing blanket 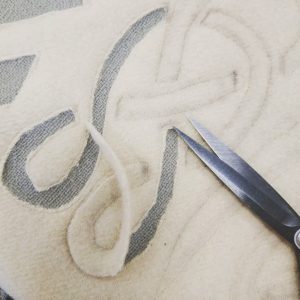 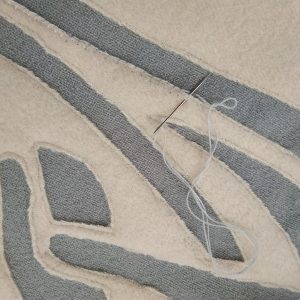 Blanket stitching around the design lines 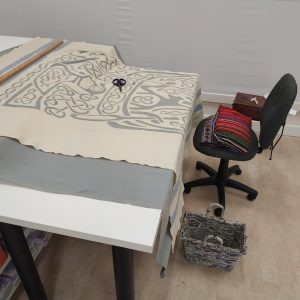 Genetic research has noted people of Icelandic descent are very likely to have blue or rarer green eyes: 89% of males and 87% of females, with green eyes being more common in the women. 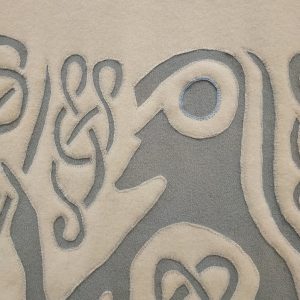 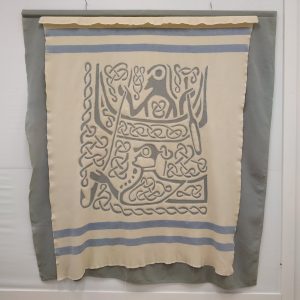 Each Articulation member explored a different aspect of the Interlake population. Visit Articulation’s Blog here to see what others have worked on.
If you find yourself in Manitoba this summer, I do hope you can take a trip out to Gimli to see this very interesting exhibition and to take in the sights in this unique town.